The Girl on the Train is an upcoming mystery thriller film directed by Ribhu Dasgupta and produced under the banner of Reliance Entertainment releasing on 26th February 2021.

The film is based on British author Paula Hawkins’ 2015 novel of the same name or you can assume that it is a remake of movie directed by Tate Taylor and released in 2016 with the same name.
The film stars Parineeti Chopra as an alcoholic widow who gets embroiled in a murder investigation. It co-stars Aditi Rao Hydari, Kirti Kulhari and introduces British actor Sammy Jonas Heaney.

The Girl on the Train Songs & Lyrics 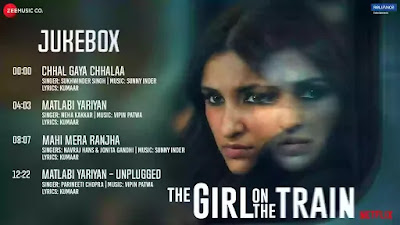